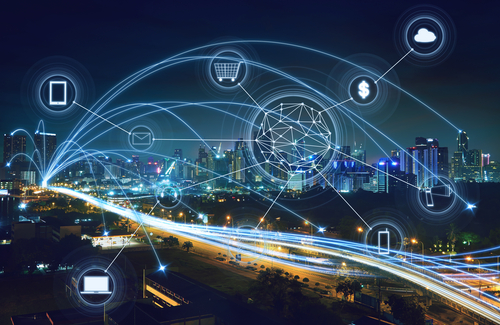 What Does the Balance of 2021 Hold for Digital Commerce?

2021 was supposed to be the year that things got back to normal. But so far, it has not played out that way. Instead, we have had an unprecedented positive trajectory early in the year. Particularly in digital commerce, it has continued to be an unpredictably positive year. New fin-tech SPACS have raised billions of dollars for investment. Mastercard announced it would support crypto-currencies on its payment networks. The stock market has surged even further, and economists predict consumer spending will surge 6% or more in the US.
So will the boom times continue for digital commerce? What’s on the horizon for the balance of 2021?
As CEO of one of the leading global trade associations in digital commerce, I am a keen observer of the key trends that will drive our industry over the next year, particularly the risks that could derail our progress. Below is a forecast of risks and opportunities based on extensive analysis and conversations over the previous year with DCA members from top tech companies, banks, and merchants in North America, Europe, and Asia, including Samsung, Microsoft, Bank of America, MasterCard and many others. So here is what will happen next:
1) The Rise of Commerce With Conscience
We‘ve all heard of ESG investing, or Environmentally, Social and Governance responsible investing. ESG investors look not just at a company’s bottom line but also at the organization’s behavior: Does it pollute the environment? Does it contribute to gender or racial discrimination? Or, does it tie its brand to the social causes that matter today?
In 2021, consumers will take a page out of the ESG playbook and apply a lens of social benefit to everything they spend money on. This coming year, whether buying stock of an excessively shorted company to get revenge on a hedge fund manager or using cashback from a digital coupon to donate to charity, shoppers worldwide expect their spending not just to meet their consumer needs but to make the world a better place. Commerce with a cause is here to stay, and 2021 is the year it goes mainstream.
2) Fin-tech Regulation Goes Into Overdrive
The challenges of 2020 demonstrated the indispensability of numerous commerce and fin-tech technologies, including social media, e-commerce, digital offers and cloud services. Societies worldwide realized their dependency on a handful of powerful digital commerce companies, including Amazon, Alibaba and Facebook, among others.
While these digital commerce technology companies scaled during the pandemic and helped the wheels of commerce spin, I predict that in 2021 consumers and governments will become increasingly uneasy with their market power. Increased digital financial data (and digital commerce competition) regulation is the inevitable result, which will occur not just in the US but also in China and Europe. But in many ways, smart new regulations may lay the groundwork for accelerated innovation and consumer choice in our industries. Many industry participants will also collaborate to implement new self-regulation approaches.
3) Tech Trade War Escalates
2020 started with the US and China trading reciprocal new tariffs on various industrial and agricultural goods. For the balance of 2021, I predict that the tech trade war between the US and China will escalate in a different arena—namely, technology services.
China has been emboldened because it was the only major economy that experienced growth in 2020 and is pushing hard to get trading partners in Japan, South Korea, and Europe to adopt its technologies in finance/payments, telecommunications, and other areas. The US will counter by pressuring long-time allies, i.e., democracies like Germany, UK, and Japan, to align around Amazon, Apple, Paypal, and others, in the areas of e-commerce, payments, social media and data privacy.
4) Credit Bubble Grows Larger, Then Pops
Normally during recessions in the US and Europe, access to credit is tighter for consumers and corporates. This time it’s different. Central banks have been quick to deploy stimulus to prop up capital markets and consumer lending. Tech companies such as Paypal Venmo follow Apple’s lead in issuing new credit cards tied to their digital wallets. New entrants like Affirm have followed by extending buy now pay later loans.
But, consumers aren’t playing along and have actually shied away from using credit, instead choosing to pay off debt and increasing savings…for now. However, as the pandemic drags on and stimulus runs out, more consumers will max out credit in late 2021. I predict that higher unemployment will combine with the negative trend of increasing rates of e-commerce purchase fraud to drive significantly higher rates of default for credit card issuers and buy now pay later firms in late 2021.
5) Commercial Cyber Wars Engage State Actors
Until now, cyber hacks have largely been the turf of private criminal syndicates. In 2021, I predict this scenario will change significantly as governments will increasingly be accused of stealing corporate secrets. So while credit card processing systems will continue to be hacked by petty criminals, expect state agencies to increasingly be in the business of pilfering intellectual property in vital sectors like digital commerce. Some governments around the world will target large corporations looking for trade secrets rather than state secrets. The prime suspects? Russia and North Korea. 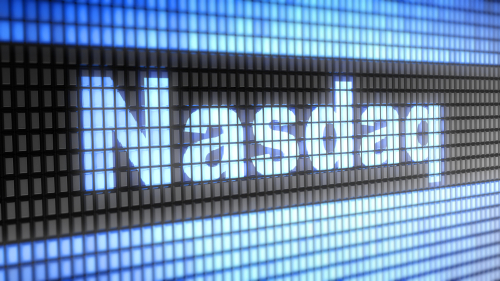 We are pleased to announce a partnership with Equilar, the leading provider of corporate leadership data, and Nasdaq, the world’s second-largest stock exchange.
The Digital Commerce Alliance (DCA) is working with these organizations—on behalf of our membership—to help make public company boardrooms more diverse.
The partnership enables members with a track record of executive experience and board service to be included in Equilar’s Diversity Network (EDN), recognized as a leading technology solution for identifying board talent. Nasdaq-listed companies get free access to the exclusive listing, including selected DCA members, to facilitate board composition planning.
The new partnership’s goal is to instill diverse perspectives in the boardroom that help public companies perform better and provide proven executives the opportunity to contribute at the board level to an organization’s growth and success.
Increasing the number of women and under-represented minorities on public company boards is a worthy objective DCA (formerly the CardLinx Association) is proud to support.
David Chun, Equilar founder, and CEO at Equilar, stated: “The Equilar Diversity Network welcomes the Digital Commerce Alliance as one of our newest partners in the effort to increase boardroom diversity. DCA members are at the intersection of finance and technology, innovators at the forefront of shaping strategies at many of the world’s largest organizations. We look forward to working closely with DCA to provide a platform to support affiliated members and companies in their efforts to increase diverse backgrounds and skillsets in today’s corporate boardrooms.”
This initiative is an example of DCA’s Trade for Good motto in action. Our non-profit trade association is committed to doing what’s right for our industry and our members. 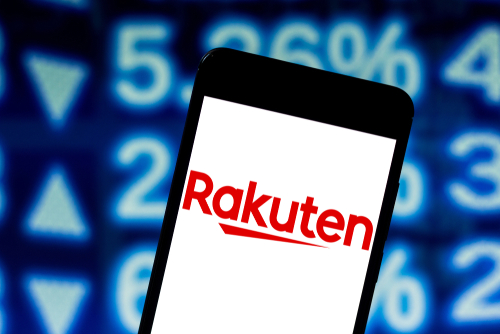 Rakuten Raises $2B to take on Amazon in Japan/Asia 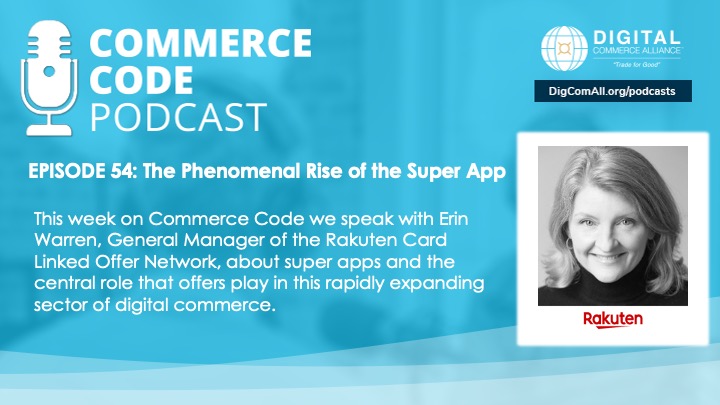 Episode 54: The Phenomenal Rise of the Super App

This week on Commerce Code, we speak with Erin Warren, General Manager of the Rakuten Card Linked Offer Network, about super apps and the central role that offers play in this rapidly expanding sector of digital commerce.

Apple PodcastsGoogle PodcastsSpotifyStitcher
Digital Commerce Alliance members include the largest and most innovative companies in fintech, payments, retailing, e-commerce and mobile wallets. Members include Microsoft, Samsung, Rakuten, UBS, RBC, Mastercard, Discover, FIS, LVMH-24S, Hilton, Fidel, Augeo, Collinson and many more in 17 countries and 4 continents.
We bring their insights from around the world straight to you in an informative new podcast called Commerce Code. The podcast features insights, interviews and the latest news from DCA members around the world. Stay connected and subscribe to Commerce Code.

We Want to Hear From YOU!

We’d like your feedback on your membership experience; you are important to the success of the Digital Commerce Alliance! This is a chance to be completely candid and share your thoughts with us- we truly want to hear from you!
Complete Survey 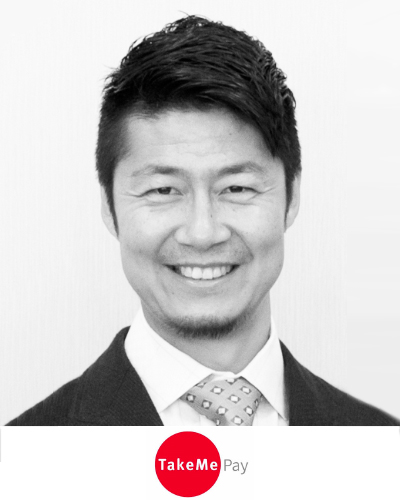 Learn more about the latest trends in mobile payments in Asia, particularly China and Japan, identify how to use mobile payments to drive sales for small merchants, especially restaurants, and get the latest insights on the resumption of cross-border business travel and tourism!

CardLinx Forum (a division of DCA) hosts a live, interactive webinar each month featuring speakers from some of the world’s most influential companies. They share insights on important and relevant topics for your business—including the impact of Covid-19 on consumer credit behavior, mobile wallet adoption, card-linking and lending trends. The webinar is always free to members and non-members are invited to attend at $99 per registration. Members and non-members are encouraged to register now as space is limited! 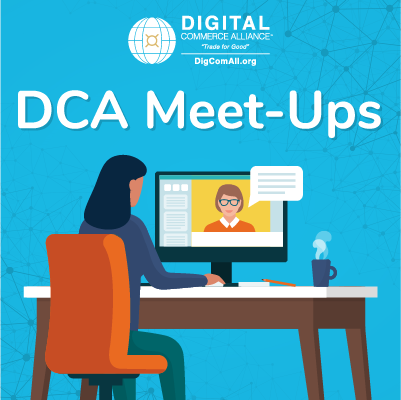 DCA Meet-Ups is an opportunity to network one-on-one with another company attending the meeting privately. DCA Meet-Ups is available at all online conferences and webinars. Please make sure to send all networking preferences to rebecca@digcomall.org no later than Thursday, April 8, 2021, for the 1st DCA Forum on April 13, 2021. 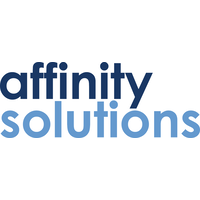 Affinity Solutions is a data-led intelligence platform that uses purchase signals as the authoritative source of truth in helping marketers, agencies and media organizations deliver emotionally resonant experiences that enrich people’s lives. Building on their foundation of innovative solutions for Financial Institutions and Retailers that drive acquisition, share of wallet and loyalty, they are redefining data-driven marketing to make it highly personalized.
Learn more at www.affinity.solutions.

Loyalty Now is a proven technology loyalty rewards platform that has established commercial relationships with trusted brands such as Visa, Mastercard, Eftpos (Australia) and Paymark (New Zealand). Loyalty Now is PCI DSS Level 1 certified. Their vision is to be the leading supplier of loyalty programs for member-based organizations. Loyalty Now’s mission is to deliver the tools, processes and functionality that bring the member and merchant closer together to create value for the member, merchant and program operator ecosystem.
Learn more at www.loyaltynow.com. 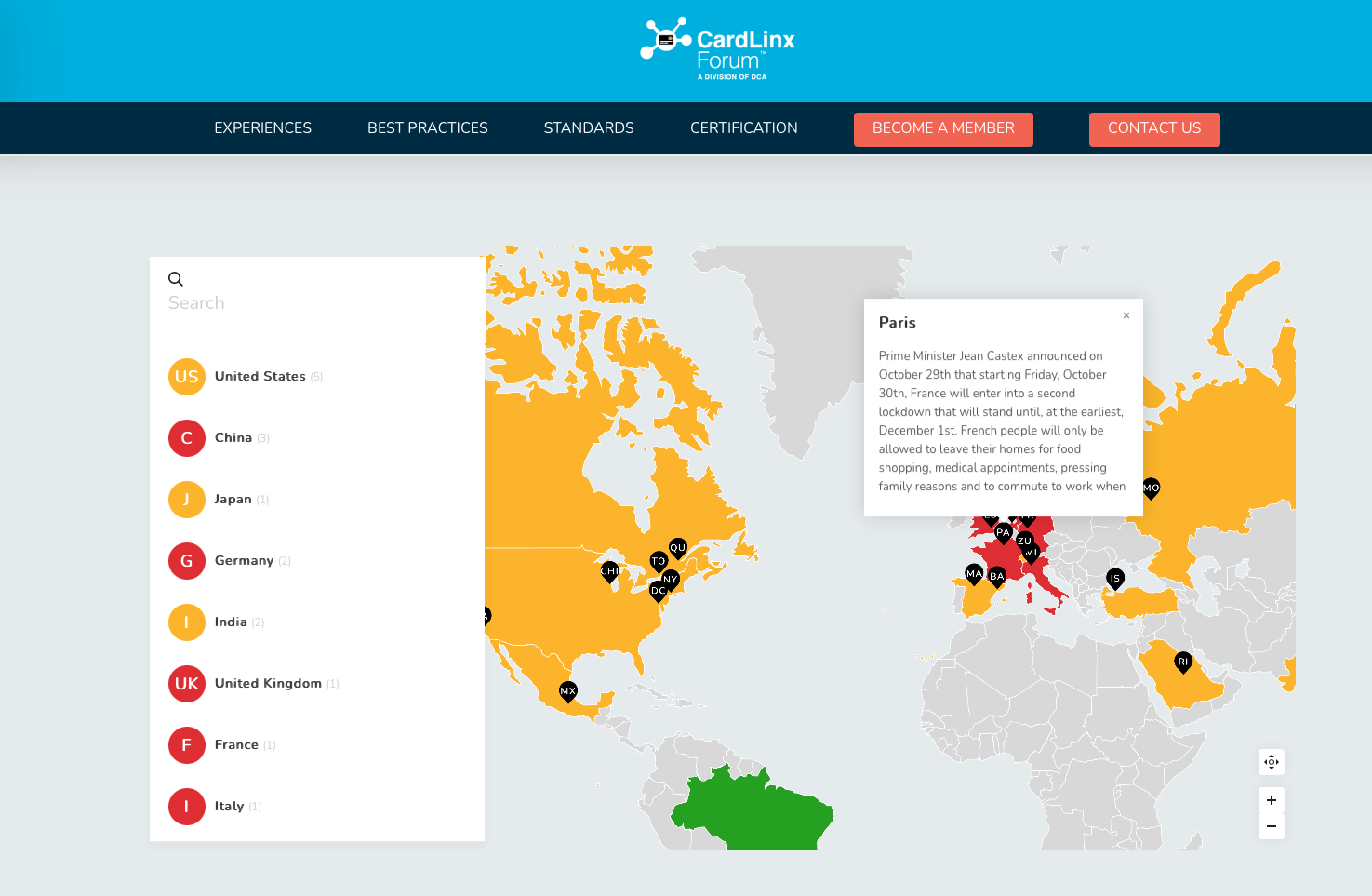 The CardLinx Forum brings to you an interactive world map that tracks the top 20 national economies of the world.

Stay up to date with the constantly changing restrictions and reopenings of economic activity related to Covid-19 with the CardLinx Commerce Tracker.